Claude Jacques, who succeeded the great George Coedes as the epigrapher and historian of Angkor and the ancient Khmers, gave me a hard time about publishing the photographs from this trip. A friend and a collaborator on a number of books, Claude has long been very concerned about pillaging, and blamed me for giving this outstanding but remote temple publicity. Malraux's thesis that isolated temples along the Royal Way are good places to start building a private art collection still holds true. And I have to admit now that he had more than a point, as later events proved.

We met recently in Bangkok at a dinner party on the banks of the river, a warm, lush evening in the rainy season. The first thing he said, eyes glittering, was 'I have a scoop! A new inscription for Jayavarman VII from 1215.' Well, a specialised scoop, I suppose, but his far greater one was five years ago, and we talked about that. In December 1998, returning home to Paris from the opening of the Centre for Khmer Studies in Siem Reap, Claude changed flights in Bangkok. With time to kill before the night departure, he visited River City, a large shopping complex on the Chaophraya River known for its antique shops. Strolling around the upper floors, his eye was caught by a vertical slab of sandstone in one window. Looking closer, he was amazed. It was a door jamb from a Khmer temple, carrying an inscription. And he knew exactly where it was from — Banteay Chhmar. He recognised the inscription, because the last time he had seen it, and translated it, the door jamb had been in place at the temple.

This was an awful coincidence for the Thai dealer, the last thing he could have expected. Despite the fact that Thai script is partly derived from Khmer, and despite the use of Khmer words in sacred amulets in Thailand, it is illegible to almost all Thais, particularly as this was the thirteenth century form. The inscription might as well have been in Martian. Thinking about it more clearly, as the dealer probably did the next day, putting this particular piece of Banteay Chhmar on public display was not a very clever thing to do — rather like offering for sale stolen silver with the owner's name engraved on it. Still, how could he have known that the one person in the world who could instantly identify it would walk by? These inscribed door jambs and stele are for Claude like old friends.

'I think he realised something was wrong,' Claude told me, 'because he came hurrying over and said, "It's a replica."

Claude had very little time to do something about this; his Paris flight was leaving at midnight. He took a taxi up to Silapakorn University, opposite the Grand Palace, and explained the discovery to his contacts there. He asked if they could arrange an interview with the Director of the Fine Arts Department, which they quickly did. Claude went through the story again for the Director, who needed no persuading. 'I know you,' he said. 'The inscription will be here within an hour.' And it was. The police raided the shop.

The alarm was raised. Finally, the Fine Arts Department was on the case. The tales of concerted pillaging at Banteay Chhmar were being taken seriously. Earlier that month, my friend Chris Burt visited Siem Reap, and Khon was eager to take him to Banteay Chhmar. 'It's only just been opened to the public', Khon said, 'You should go.' In town, Chris met Doug Preston, a writer for National Geographic, and his wife. Doug had mentioned that he was having difficulties with the story he had been assigned to. Its genesis had been a unique, ground-penetrating radar image of the entire Angkor site made by the Space Shuttle Endeavour in 1994. It had revealed a definite pattern of large rectangles northwest of Angkor Thom, very close but in an area that had not been thought to have ancient settlements or temples. The assumption was that there were undiscovered temple enclosures pre-dating the majority of the monuments. In the event, on the ground nothing much had been found. there were no hidden temples lurking beneath the soil waiting to be rebuilt.

Chris took pity on Doug and invited him to join the trip to Banteay Chhmar, which he knew from Danny and me was at least an evocative site in a wild state. They set off in two vehicles, Chris, Olivier (a French diplomat friend of ours), Doug and his wife, and Khon. When they arrived, after ten gruelling hours on the road, the group split up, Chris going around the long south wall heading west, the others taking the north wall. When he finally reached the western end of the temple, Chris was taken aback. There was a long breach in the west wall, and inside the enclosure was cutting equipment. this really did look like Malraux's 'mason's yard', with cut stones littering the ground and freshly painted outlines on some bas-reliefs, clearly indicating what was to be removed next. The others caught up with him. The work site was abandoned, or so it seemed at first. As they explored further, they heard voices from beyond one jumbled section of stone. At this point, Khon realised the danger they were in. This was a professional, large-scale operation. I read Doug's account in the National Geographic (in hero mode, he omitted the other members of the group apart from Khon, whom he referred to by his full name, Sokhon). It went ...

'Sokhon picked a cut tendril. "Look at this," he said, his voice shaking. "The leaves aren't even wilted. This is still going on right now. We've got to leave immediately."
Then ... 'Sokhon appeared with a look of sick fear on his face. "There are fresh tire tracks back there, made by a military vehicle.'

I said, 'Khon, somehow that doesn't sound like you. All that shaking, sick fear and hissing.'

I explained, adding, 'was the writer just playing it up? Pumping the drama?'

'No, absolutely not,' said Khon. 'I really was afraid, for two reasons. First, you know that there were still Khmer Rouge around then, and you remember what happened to the de-miner north of Angkor Thom.' This was a case in which a mine disposal expert working for the Mines Advisory Group (MAG) had been abducted, together with his guide, and taken to Anlong Veng, where they were murdered.

'Second,' Khon continued, 'the hermit who lived there, the rishi, told me, "You're lucky you came today. If you'd been here yesterday you'd have seen them working day and night." And I knew the local military were involved. That was obvious. If we'd seen them, and they knew it, then something would have happened to us. Not there, because there's a village nearby, but on the road back where there's no-one.'

On Khon's instructions, they would not stop for anything, and in the darkness they deliberately ran two military checkpoints. The troops at each one were too surprised to react. At one a young Khmer soldier raised his rifle, but not quickly enough to use it. They sped on towards Sisophon. 'The two things I remember clearly about the journey', Chris told me, 'were first, that this was the one time in my life that I felt in danger of being killed, and second, the moonbow.'

'Oh, it's extremely rare. It's the night-time equivalent of a rainbow and you need very unusual conditions — a bright full moon on one side of the sky and falling rain on the other.' Chris takes a keen interest in meteorology, and somehow this excited him more than the very real prospect of being stopped by rogue elements of the Cambodian army. The next day, they reached Siem Reap, without mishap. The National Geographic story was saved; it had been an adventure.

Doug approached the authorities in Phnom Penh, and predictably nothing was done. In Cambodia, as in Thailand, the military have an extraordinary clout, and these were joint manoeuvres with a large financial stake. However, once Claude had raised the issue and the Thai government decided that this had all gone too far, things began to happen. There were tip-offs. In the following month, January 1999, the police stopped a 10-wheel truck of the kind used for transporting buffaloes. This was in the far east of the country, close to the Cambodian border, on the Suwannasri road between the towns of Sa Kaew and Prachinburi. In it they found 117 blocks of stone, numbered and in sacks. The driver told the police that he had collected the cargo at a dawn rendezvous with Cambodian soldiers. These stones, when assembled by the Thai Fine Arts Department, turned out to be two sections of wall from Banteay Chhmar, each carrying the bas-relief carving of a multi-armed Lokesvara.

A few weeks later Claude went to the temple to confirm the damage, and was shocked. In the west wall, which I had photographed exactly six years earlier, there was now a 36 foot-long breach. Where there had been eight Lokesvaras there were just two left standing. Another two were lying collapsed on the ground and the central four were gone. Some looting had been going on occasionally before, Claude knew, but nothing like this. 'I found that even in 1988 some artefacts were stolen, but this time it was made on a — if I may say so — industrial scale.'

Finally, in 2000 the Thais returned recovered Lokesvaras and the inscription to the National Museum in Phnom Penh. Bertrand Porte, the conservator, showed me the two sections of wall stacked at one side of the central courtyard, one of 63 blocks, the other 26.

'We'll have to find a better place to display them', he said, 'maybe even re-install them at the temple one day. Who knows?'

To reduce the weight of the pieces, each of the 89 blocks had been cut approximately in half, leaving the inner, un-carved part of the wall on the ground. Bertrand would have to go back at some point with a team and collect these discarded fragments.

'Look here', he pointed to a series of short straight channels at the edge of one block, 'they used a pneumatic drill to split the rock. Well, it could have been worse.' 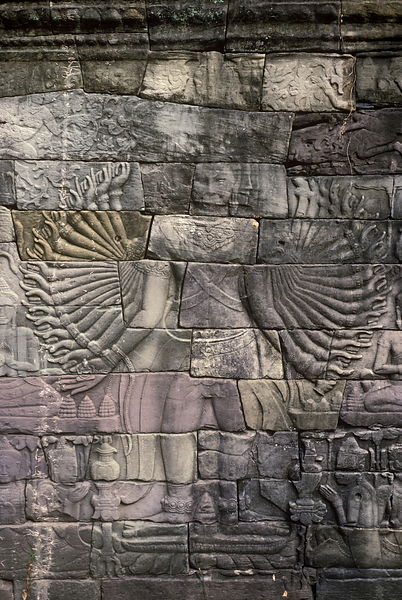 Avalokitesvara
Bas-relief of a multi-armend Avalokitesvara ond the west side of the temple complex of Banteay Chhmar one of the largest Khmer temple cities, situated in a remote area of northwest Cambodia. Built between the late 12th and early 13th centuries during the reign of King Jayavarman VII.